So I have an Ibanez ATK300, a lovely bass with a pretty weird but solid pickup.

I’ve bought some roundwound snares for the low end, and I wanna use it in combination with my UR22 audio interface for producing Dub etc.

My question is if anyone has any experience with using a bass guitar and if there is anything I should know that would be important.

guitars have a lower impedance/level than ‘line’ level so you will probably need a pre-amp or DI box to get a better level into your recording device.

Yeah i’ve noticed that when using my electric guitar, it won’t have any descent output until I put a distortion pedal in between. And are you by any chance dutch ?

no i’m from london uk m8

Get a DI. The sansamp ones are great, pretty much an industry standard. If you have a mic and preamp as well, try recording the DI and the amp and blending between the two at mixdown.

I’m a bass player and have often combined electric bass into my electronic productions.

I use a tube preamp that also functions as a DI that then goes to my soundcard. I do have mics if I wanted to mic my bass cab but often, just for simplicity while I am jamming on ideas, I will just use the preamp.

half the time in a mix context you wind up using mostly the DI track anyway, especially for clean low end, and the amp blended in just for some grit. A good DI will be a great investment if you are a real bass player.

Thanks for the info guys

According to the specs of your bass, that’s an active pickup and therefore produces a line level signal.

Therefore, if you want to use it with your UR22, you just need to activate the Hi-Z switch in input 2 for direct recording (according to Steinberg’s website: https://www.steinberg.net/en/products/audio_interfaces/ur_serie/modelle/ur22.html).

I’m going to build my own valve preamp this year this year I think so I can record my Fender Jazz, please post some recordings and a breakdown of what you used so we can have a listen!

I think I will drop this here, as it is probably the best thread for it.

I’m thinking of getting one of these DI’s for my bass: 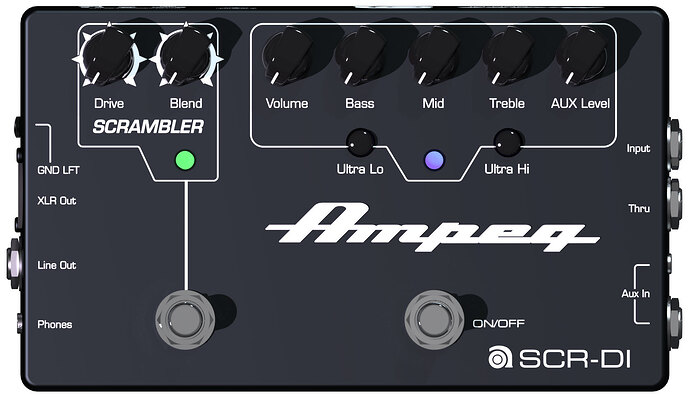 Looks nice. I haven’t heard about these. Hopefully the drive sounds good, because you only have one type. What is great about the sansamp is you have a few different types of drive to help shape the tone a bit more, but the wet/dry blend on this would be very handy.

I’m not much of overdrive kind of bass player (although, I will run my bass through a Russian Big Muff when I want that kind sound, but maybe that is more distortion than overdrive).

I’ve heard some youtube vids, and it sounds OK. Some people like it and some people don’t. I’m more about the pre-amp/DI. It apparently gets close to the Ampeg SVT sound without having to lug around hundreds of pounds of gear.

I’m going to check it out more. The aux in and headphone out seems cool; I can practice at night with my headphones. I don’t really have a good setup to do that right now.

I’m going to build my own valve preamp this year this year I think so I can record my Fender Jazz, please post some recordings and a breakdown of what you used so we can have a listen!

Alright, I will post one. You don’t really hear electric bass in electronic productions that much. Maybe more in House music.

This was done a few years ago. My recording chain would have been a Fender fretless Jazz Bass going to a PreSonus TubePre preamp/DI to a PreSonus Firepod soundcard into Ableton Live.

That’s pretty funking good actually. I think bass guitar was more prominent before 2000, a lot of jungle had it in (or double bass). Digital synths might have killed it off because it’s hard to get a good electric bass sound out of them and not as many people are interested in sampling.