Did anyone see all of this kick off the other night? There’s a pretty heated conversation still for viewing on twitter. Something along the lines of Blah selling Tommyz music but not paying him etc. 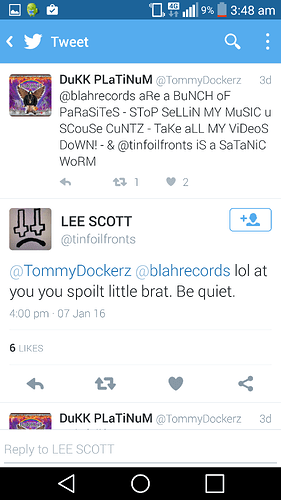 Any fans of Blah and/or Dockerz in here?

i like some of the Cult Mountain stuff, just found this on scogs as it goes fuckin hilarious price

Label: Not On Label (Cult Mountain Self-released) - none • Format: Vinyl 12

get a car or get this

i hope the guy ordering this mountain bit is called mohammed

Not as forthright as Rod Azlan calling for P Money last night:

P MoneyYeah, I listened to your song about how hard you are and I conclude you are not being truthful and will happily engage in combat with you unto the death. not bragging but you are not worthy in fact, I surmise you might be an actual homosexual. Not judging at all but come on mate. Guns and bullshit are overplayed and overdone in this age

Top guys keyboard is fucked whO rIGhTS lIKe tHiS fss

never heard of them

It’s just part of the ‘Dockerz’ image. They put out so many jokes tunes, but in equal measure they have loads of quality material and obviously have ability. I’ve got ratings for them imo

That’s jokes.
Here’s some “normal” hiphop from Dockerz for anyone who’s wondering what the fuck he’s about https://youtu.be/7oNC1wA9Ii0

They’re definitely a bit love or hate. I think because of the large range of slang/dockerismz they use + the developing themes through their music it puts some people off because they haven’t a clue what the fuck they’re on about haha.
Shame all his Blah uploads are down because there were some great tunes on there. I suppose band camp will have to do