Compton: A Soundtrack by Dr. Dre 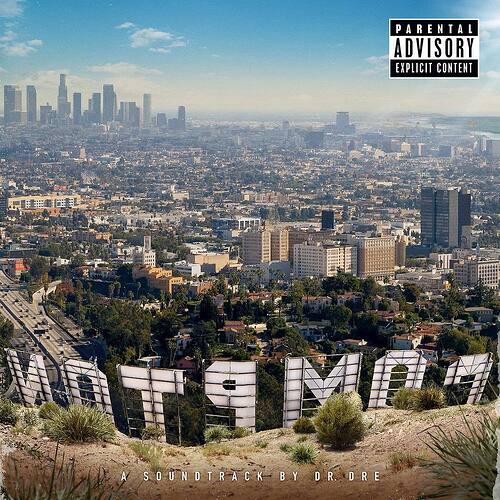 "Dr. Dre has announced Compton: The Soundtrack, inspired by his work on ‘Straight Outta Compton’, the upcoming N.W.A. biopic. The album is out August 7, exclusively on iTunes’ Apple Music.

Dre made the announcement on his Beats 1 radio show “The Pharmacy”. He was joined on today’s episode by Ice Cube and Straight Outta Compton director F. Gary Gray.

The album was first revealed by Ice Cube, who also reiterated that a planned N.W.A. reunion tour might be happening. Recently, a representative for Dre and Eminem (who is also rumored to partake in the reunion) denied that anything was in the works.

The album comes on the heels of the wait for Detox, Dre’s long-gestating follow-up to 1999’s The Chronic 2001. After releasing singles such as “Kush” and “I Need a Doctor”, and teasing a February 2011 release, nothing happened. Last summer, reports emerged that Dre had dropped the Detox name entirely. Now, Dre has revealed that he scrapped Detox because he was not happy with it:

Shouldn’t this be in hip hop?

Anyway albums okay. It gets better as it goes on.

But for me, it’s mainly about the instrumentals, and those instrumentals are wack honestly. they sound so EDM/trappy. so many supersaws and trap snares/hihats/808s. no g-funk whistle melodies

. most of the tracks on 2001 were great. some of these are okay but there’s not one where I’m like damn i want this one. i bet detox would have been just fine.

and this is supposed to be a soundtrack to a movie that takes place in the late 80s / early 90s? may as well have just pulled tracks off the chronic / 2001 and ice cube tracks etc.

i’m no hip hop critic though, so :shrug:

Fucking woeful.
Overproduced sing-song garbage with Dre occasionally showing up with his frankly bizarre pitched-up voice.
Second half is a bit better but it’s all too little too late. Snoops bars are prob the high point of the album, his best performance in ~15 years. Kendrick does an ok Kendrick impression, Xzibit pops in with a solid verse for the first time ever.
The less said about Eminem the better, sounds like he’s struggling to re-live the Slim Shady days but his heart just ain’t in it.

I quite like anderson paak’s 8oom 8ap, so I’ll peep this.

I think most people that think this albums amazing probably decided that before listening to it. Swear just any mention of Kendrick and people get a semi.

Darkside/Gone is probably my favourite tune off the album. Even though its a bit b8 and the whole ‘note to self’ diary shit is a bit played out I liked the last song too, one of the only ones that actually felt like a Dre song; probably cause its just him lol.

they should’ve bought back MC Ren…

seeing kendrick if anything gave me the opposite feeling

Xzibit pops in with a solid verse for the first time ever.

his first record is brilliant ?

Enjoying this so far. Darkside/Gone and Issues are quality.

Who does the last verse on Darkside/Gone…is that Kendrick Lamar? Not familiar with his voice.

Who does the last verse on Darkside/Gone…is that Kendrick Lamar? Not familiar with his voice.

Yeah kendrick, he also does a verse in the first half of the song. I think it’s my favourite song off the album, genocide instrumental is nuts. Still not blown away from the majority of the album.

The skit where they’re disposing of the body made me laugh though.

That just reminded me of stuff on early eminem albums.