Hi guys, I’ve got 5 tracks that I consider to be about par for the quality of my songs. They’re all traditional riddim based but heavily influenced by “real” dubstep. The main sounds you’ll hear across all the tracks are the same 808 sub synth, the same builds/crashes and similar drum samples but different processing as well as a couple synths are reused but have different FX chains on them. My goal is to have a defined sound across every track but also keep them away from brostep-esque vibes. I’ll give a more in-depth description of each track.

I would love honest feedback from the technical, compositional, mixing and mastering standpoints. Tear it apart. None of the tracks are done, but if you feel inspired by one of them- I would love to have some people build on top of my existing projects. I’m more than willing to send stems.

Here’s a link to the project playlist:

Stovy - R081 [Riddim/Dubstep/Bass-Trance] https://soundcloud.com/stovymusic/r081/s-uFJBy
This one works with 2 main synths created in Serum and Razor. Involves heavier drum patterns and experimental rhythm patterns. It has a trap inspired intro that I’d like to incorporate to all of my tracks, maybe have hip-hop sounding intros for all of them? I feel like this is the strongest track in this project, but that could be because the intro sounds the most put together to me.

Stovy - R076 [Riddim/Dubstep/Bass-Trance] https://soundcloud.com/stovymusic/r076/s-iT9JO
A more traditional Riddim track with a simplistic flow and basic drum patterns. I tried to make this one sound for straightforward without a bunch of other elements to distract from the rhythm. I also feel like the intro flows well into and out of the drops.

Stovy - R075 [Riddim/Dubstep/Bass-Trance] https://soundcloud.com/stovymusic/r075/s-jJ6XF
This one is very repetitive and doesn’t switch up much. The flow stays consistent with a base layer synth playing the rhythm pattern for the entirety of the drop but includes higher layered synths that modulate and float around. This one is personally my least favorite from this project but I have only gotten positive feedback for this track from everyone I’ve showed it to.

Stovy - D035 [Riddim/Dubstep/Bass-Trance] https://soundcloud.com/stovymusic/r080/s-C2cL3
I feel that the final name for this one will be “Paper Straws” as the pre-drop vocals talk about doing coke through paper straws and that could be a good hook for people to remember the track. The synths in this one are created through Serum with my favorite patch that I had made for an already released song “Green Stash”, but the synths are barely recognizable between the two songs.

**As a side note you’re probably like wtf is Bass-Trance, well I’m “trying” to define a sub-genre of Riddim Dubstep that I would like to call “Bass Trance”. From the experience of myself and a few others around me, we’ve found that traditional riddim has the essence of “Trance Music” in the sense that its has repetitive nature with slow builds. Essentially something you can start jamming and zone out to and Bass Trance will embody that but differ from normal Riddim Dubstep with fewer switches and a heavy focus on the flow of the synth rhythms patterns.

I was speaking to my gf at dinner the other night about how we always wanted more bass in our trance so I’m excited to see where you can take this. Good luck bröther and mashallah.

It could catch on… 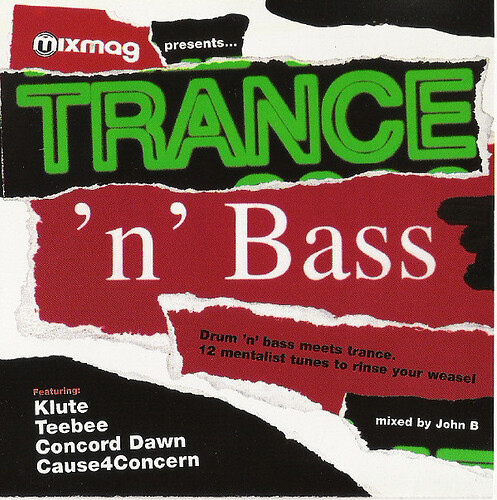 View credits, reviews, tracks and shop for the 2002 CD release of "Trance 'n' Bass" on Discogs.