We should have a thread for discussing old shit you want released:
such as this

just read all of epiccentipede6942’s posts

can u imagine the jungle/garage/hardcore dubplates though?

those you will absolutely 100% certainly never ever hear, and theres probably loads of amazing shit lost to time completely

i really have no clue tbh, I don’t even know how much of a dubplate culture hardcore/garage had.

If you listen to old garage mixes from 98-99 there’s often so many tunes I’ve just never heard and will never find. A lot of stuff got pressed to white labels for limited runs and are now proper cheap on discogs, I reckon a lot of dub step dubs that ppl go on about now would have been pressed to 50-100 vinyls if cdjs and mp3s didn’t exist.

yeah that does make sense.

Also Watermelon Dub is a percy, forgot about that one.

Both had a huge dubplate culture. There are tons of old tunes that never came out that were played on the pirates and at raves. At least now we have YouTube at least for radio rips and such. There are some pre-internet dubplates that are no doubt forever lost in every form

gonna avoid posting DMZ crew or skrenga as they’re are always mentioned, and there’s just too many. could post 100 vids but no one’s got time for that

I have never mentioned dubplates in my life!

Not exactly the sound this forum has been focusing on, but I still love this track, and hope it gets put out since Kromestar is starting to put stuff out himself.

Would be awesome if this one came out

This one is nice as well, Coki on a dub ting

Mr Natural warns of the danger of vinyl obsession
from experience of his creator: 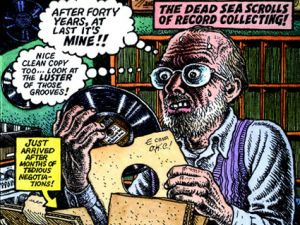