I’m trying to categorize my genres in the best way possible. I have spent years and years on trying to come up with the perfect way to catalog my music!

I strive for relevance, accuracy, conciseness and ease-of-use. Right now I’m having trouble with “dance & rhythm”. I don’t really feel like it’s a good descriptor for that category, because a lot of the other music genres in my collection are rhythmic and made for dancing…

Some pointers would be nice!

There are subgenres in most of the folders, so don’t delve to deep (The fact that I have a dubtech folder in both my Chillout and Techno folders ought to give you a hint about what a soul-tearing dilemma this is for me).

PS. No, I will not be migrating to iTunes, Spotify or anything like that. Regular File Explorer folders is where it’s at. 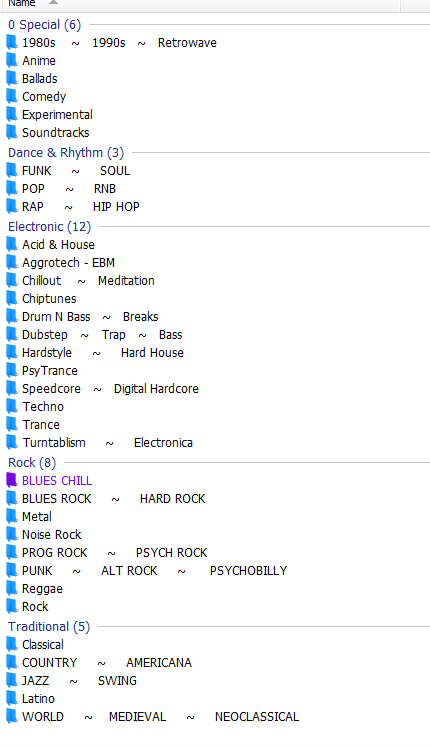 What you need to do is drag that Hardhouse file over to the recycle bin, then empty said bin. I would empty it a 4 or 5 times just to make sure

The only thing that matters is that YOU know what’s in those folders, highly doubt someone else can help you out with this without it becoming some masturbatory genre naming exercise

good luck tho i guess

give up now and just put it all in one or two massive folders.
compartmentalising music on that kind of scale is an exercise in futility

Delete everything other than the folders in the electronic category

Idk I don’t organise anything so I say just leave files spread across ur PC and spend 20 minutes looking for pe$o.mp3

This.
Then go outside and speak to some girls

I’ve actually converted all my files to AIFF and renamed them 1.aiff through 12000.aiff

it’s easy once you get used to it

i must admit i have a folder called new minimal dnb

Then go outside and speak to some girls

organize it by how it makes you feel.

There is no perfect music folder setup.