'The Sound Of Bristol' Vice/Noisey Documentary

We spoke to producer and editor Charlie Rees about illustrating exactly why, when it comes to music, Bristol is the capital of the South West.

Kahn just linked this out on Facebook, must be worth a watch.

Reminds me, does anyone remember that dubstep doc from yeeeeeeears ago? It was Bristol based and chatted with like Headhunter, Pinch and all the bristol crew as well as bloggers and that. It was a bit like Dubfiles but just Bristol

yeah man a very young looking pete in that too haha, and joker in his studio wearing silly hats holding stuffed animals, there’s 2 bristol ones i think, mary anne hobbs one and there’s also living inside the speaker i believe

look forward to checking this, thought this might be the one they were shooting at a night i was at last week but nah

yea yeah man that’s the one! I remember thinking Joker was a funny guy in it aha. can’t find it online anywhere.

Good to see Kahn chatting on camera anyway, that seems to be a bit of a rarity

Lol my nu leng seem a bit out of place in this. Ukf ting 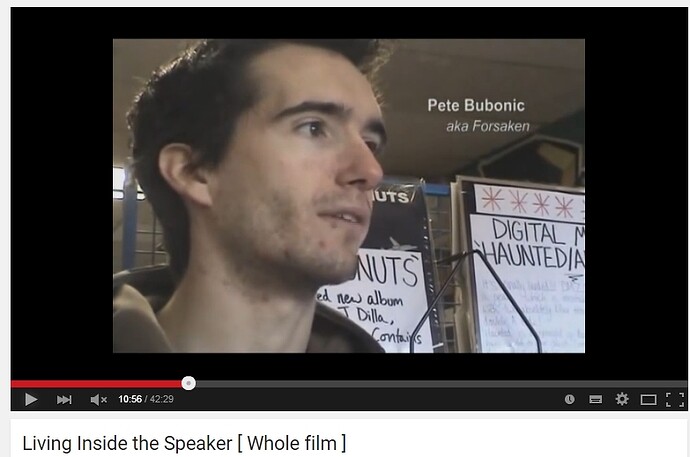 big up nice one for this! knew @pete_bubonic was in there somewhere nice swan!

Music credits are at the end.

brilliant little doc… wish I was around those parts…

Yeah its on his SC
https://soundcloud.com/forsaken/taiko-riddim

Such a sick tune. Cheers for the pointers!

Jesus. Hard to think I was ever that young.

I remember Living Inside The Speaker completely sold me on dubstep, probably wouldn’t be on here if not for it.

Gonna check out the video in the OP. What’s the deal with Vice/Noisey? I thought they were pretty EDM-centric but it seems not

lol, not even slightly. They shit all over that stuff

Jesus. Hard to think I was ever that young

yo anyone know where i can find this? not on youtube anymore