What do you think of Flume?

I’ve occasionally heard a back announce of a Flume track
and thought: well that didn’t stand out for me… unless as "busy"
and have not pursued deliberately listening to his stuff.
I’ve picked up Mix Mag the other day with an article praiseworthy of his originality
which I’d normally take as guff
except it gave a bit of background
which is pretty-much boring apart from him being a bodyboarder which resonates with me.
So I’ll have a listen to some of his tunes
but expect to be unimpressed like with Chet Faker, Flight Facilities & the bunch of Aussies
who seem to have gained international recognition lately for what reason I haven’t figured yet.
(this mob excludes Cliques & Epoch whose value is evident but not so commercial)

edit: o yeah, got any tunes you think worth listening to or explanations for why his music is becoming popular?

I like his songs with Chet fakers but besides that pretty eh. Seems like he tries really hard to make this intangible ‘sound’ and ends up doing the same thing over and over again with a different beat that has no flow

realy bait. that whole james blake -influenced stuff with full on saw/square chords and wonky claps is so 2011. haven’t heard much of him tho but that’s what comes to mind

ta, I’ll take that on board.

Never really listened to anything besides the obvious singles like that bait Disclosure remix, but I was really pleasantly surprised by his latest album. Most of the instrumental tracks are a little toothless but pretty much all the tracks with vocals on them are bangers imo, I usually play a couple of tunes from there when I play out atm.

hmmm, interesting…new album an improvement
sfunny, in this interview he says he’s becoming bored with his own music
and pissed off with copyists
hence remixes & collabs

couldn’t be bothered in the end
better things to do
I’ll just assume he’s another Diplo.

features like this are the opposite of making music

Here in my town in Southern California, Flume fits into the sphere of EDM musicians, “underground rappers”, and not so popular pop artists alongside Kygo, Logic, G-Eazy, Pentatonix, and this folk duo everyone goes crazy about called “Us the Duo”. Trendy kids listen to this stuff while drinking boba or driving to the beach. Yeah you can tell I’m pretty sick of this music tbh

Yeah I can see how Flume’s music takes a hint at James Blake’s stuff, but the whole wonkiness / messiness of the tracks just make me sick. complete b8

his remix of Tennis Courts is absolutely wicked imo. None of his tracks stand out for me, but the drop in that tune hits the spottttt

Sadly the only James Blake tunes I really like are his old dubstep ones.

listened to his latest album the other day on a rel’s IPod dock
it immediately sounded like emo…emo electronica…pop
with bro drops and hysterics.
as I listened I began to hear his cleverness
and his great ear for all the elements he was mashing
so that i understood the attraction of a young audience.

meanwhile
if you’ve not heard this before
from 2.00 in particular:

I’m not listening to that ^ shit again!

but a lot of people think differently 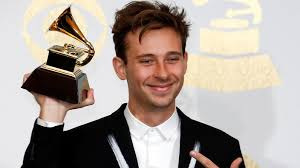 “This is totally insane.” said Harley.
not wrong mate.