So I’ve been trying to get my head around these high end bleep sounds Zomby has used in multiple tunes. I’ve been able to get fairly close with squares/saws with short decay, reverb and delay but Zomby’s have a shimmering/decaying sound to them. I’m not sure if this is in the sound itself or certain reverb/delay/other effect parameters. Does anyone have ideas?

Start at 0:50 and throughout

Start at 0:50 and throughout

try an arpeggiator, flick around with it not on the 1/4, 1/8 but on the like times setting, that gives the twinkle

and ye lots of reverb

in first one sounds like a heavy sidechained reverb/delay, so on a send have ya reverb and/or delay and a compressor sidechained to the synth so u get that delayed sparkle but not fucking with the original pluck sound

Is it perhaps some kind of shimmer (pitch shifting) reverb or delay?

isnt it mainly just a volume filter? Like cutting the volume up and down really fast? A bunch of filter plugins should let you do that

I. Usually base this sound off two squares, one two octaves higher with a square LFO on the mix between the two oscs. 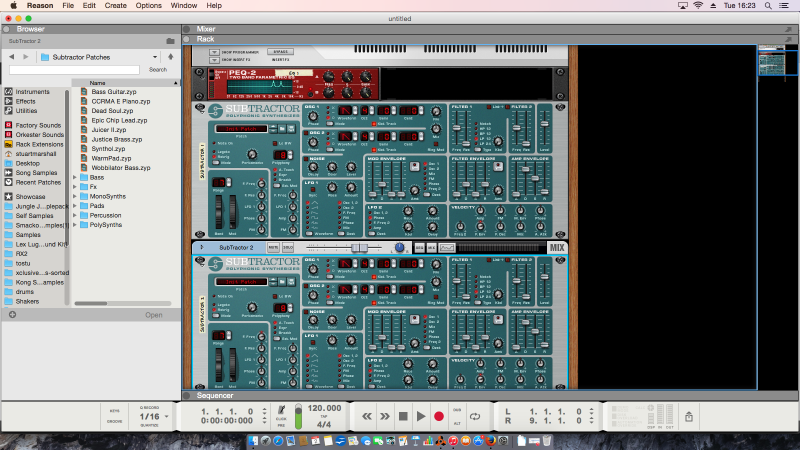 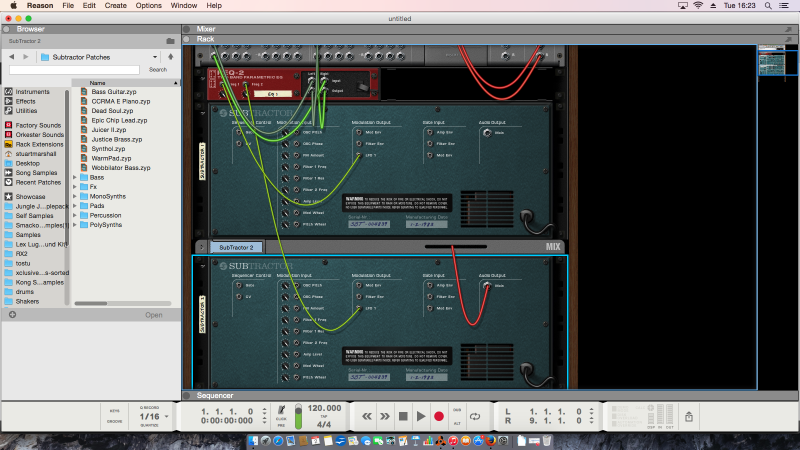 set the eq’s to be really pointy in the high freq then sync up the lfo from subtractor to the frequency on the back, thnk it’s kinda a reason specialty, could be done in other software i imagine if you knew what you were doing

ignore the lfo settings and where the freq points are sitting i did this really quickly just to give you an idea of how i think that sound it obtained…it certainly can make a watery sound, thats how i’d describe it

sorry about the image size/resolution, i think only reason uses will be able to understand whats going on here sorry !!!

It sounds like it could just be 2-3 delays and maybe some reverb. I am not sure if this is a feature on a lot of delays but Replika has a diffusion setting that gives you that sustained aura sound. If not a delay, you might be able to get it from diffusion reverb setting. I hear the stabby synths bouncing around a lot in a different delay so maybe try two delays in parallel…some ping pong thing and then something for the diffusion.

Heres is a quick clip of what I made this way

Listen to Zomby Double Delay FX | Clyp is the easiest way to record, upload and share audio. No account required.

If you want the exact settings for the clip I can show you what I did exactly.

FM8’s psych delay is really really awesome for stuff like this too. You can pitch the delay signal up (or down) an octave and stereo spread it so you can take a really simple mono sounding arp and make it fill a lot of space.

Yeh man if you could send us the delay time settings and stuff I could try whip up something in ableton, The loop you made actually sounds pretty close cheers for the input.

Forgot I used some psych in FM8. The two Replikas were in parallel.

Vallhala shimmer is a pretty sweet plug in. Prolly do it for ya

my take on them zomby arps, I used sakura in FL with some sidechain and a bit of chorus, flange and reverb. also eqed to taste afterwards

the vast majority of the high end comes from FM modulation… just modulate the main waveform with a sin or square like 4 or more octaves higher.

To me it just sounds like a short little high octave melody with some delay basically.

Yeah im a massive fan of these kinds of sounds. I aint no Zomby but if you want to know any of these sounds i can help:

This is a really dope track man, feeling it. Would honestly think it is a Zomby track if I just heard the audio.

Insight into any of those bleep sounds even those lower ones would be much appreciated.