this one by a friend of mine:

i prefer death metal might start a thread for that, like the one about chainsaws on this

more posting cos of the first track it’s so weird!
i think it’s by a dude from tangerine dream, it’s like house and uk funky with trap snare rolls, it’s fucking cool

on a shining tip

this just came out

black metal project from members of rise and fall, oathbreaker (which are among the best metallic hardcore bands around) and amenra

new dodheimsgard album came out his year as well

i don’t like bathory one bit tbh. i think like with p much all first wave bm bands there’s better merch than music

yeah Bathory’s a bit boring and sounds often very confused, like they couldn’t decide what sound to go with so they did both and it ended up sounding terrible. but I really like the vibe of old Burzum / Mayhem etc albums. shit recording quality sends everything in a space between “heavy metal” and ambient music.

plus Satanic Warmaster and Darkthrone have riffz for dayz

satanic warmaster is pretty lulzy. idk if he takes himself seriously or not.
i like darkthrone but mostly their later moonfog records that were a bit more experimental then their usual style, and that cult of goliath or w/e it’s called album before they went all dadmetal.

i like a lot more current bm, mostly due to better production tbh. sure i like a lot of raw stuff but idk it definitely sounded better when i was listening on shit speakers and ear buds and i wasn’t fully into electronic music.
i think the genre is held back by shitty lyrics and general metal dorkiness. probably explains why i’m more into newer bands that either come from other scenes or are over the rock-ish/dadmetal elements

My favourite bm band gotta be Drudkh, they create such gorgeous atmospheres.

When talking about the riff-oriented classics I think I should add Satyricon and Immortal. Listened to these so much a few years back:

(This video is jokes btw)

Never been a big fan of black metal, but ive always had a soft spot for Immortal. At the Heart of Winter is one of my favorite records fullstop. (and yes, i know, it can be debated whether or not its actually black metal at that point)

Some of my personal favourites:

Love this tune and in fact the whole album it’s from.

Also check this guy, beautiful stuff with black metal influence (thanks @wubstep for introducing me to new Polish music)

It took me a while to get into Liturgy, because Spotify kept on suggesting wrong tracks and I am still not entirely into the vocals… This tune is the shit tho.

(not sure if still black metal)

abbath played the venue i work at last night, it was utter shit tbh, just really boring spooky facepaint crap, did give me the urge to listen to some proper screechy walls of pain black metal though, really enjoying the burzum aske one jrk posted

i want this fucking lighter so much 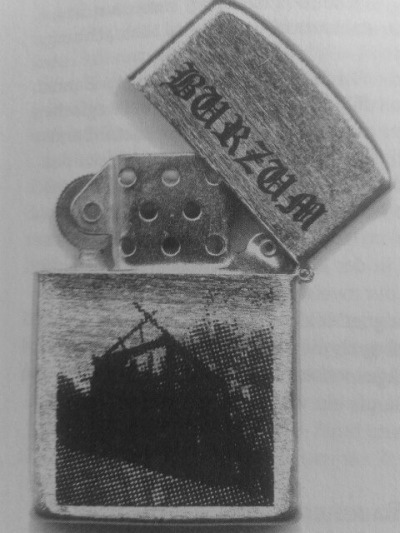 Imo it’s important to remember that Immortal never wanted to be a part of the TNBM-movement in the first place. I’ll link a source later, I think it was from the “Until the light takes us” documentary.

even so, i still think they’re the least interesting og norwegian bm band

Fair enough. I never really ‘got’ Emperor, or Immortal for that matter, my self. Regardless though, when I saw Immortal live at Wacken Open Air 2010 I got goosebumps.

Edit:
So how do people feel about Nargaroth?
I listened extensively to his stuff back in 2007/08 but at some point got disinterested for some reason. Perhaps because I didn’t have the money to buy newer releases from dodgy looking german webshops etc.

I can’t take the whole “black metal ist krieg” thought seriously. Ok, so Mayhem/Burzum in the early days maybe talked about starting a ‘war’ with the Christians, but I feel that that thought died back in the 90’s.

A couple of personal favourites:


I urge anyone interested in Jahreszeiten to listen the whole album from start to finish. The songs on here are good by themselves, but they go really good together and give each other sort of a musical context.
https://www.youtube.com/watch?v=s3Yq4o6GVfA
ultraspatial January 27, 2016, 9:42am #21

always took nargaroth as a joke but who knows lol

Yeah idk. I think the whole GBMC-operation (German Black Metal Commando) he’s got going on now is looking more like a coverup for neo-nazism stuff.