Interesting. This is a direct move on Apple’s languishing share of the creative sector.

Haven’t seen any audio specs or anything but there are lots of indications that it’ll support DAWs. Bet Bitwig’ll jump on seeing as its already touchscreen compatible. Has an integrated dial interface too.

So Microsoft did what Apple didn't have balls to do: Microsoft's New Surface Studio PC is a...

Hi, I am excited over the new Surface Studio PC from Microsoft. How cool would it be to use this... 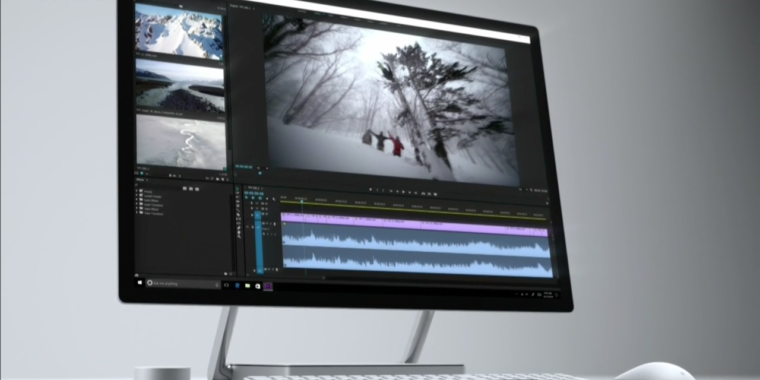 It's sleek, beautiful, but a little bit strange.

I dot get it? Just build a PC if ur using it Inna studio u don’t need great specs tbh. Loads of ram rly is all u need. And a top soundcard and maybe like optical output

depends what ur doing with it really. I need a decent processor too for all my cpu-cycle hungry plugins.

I can see how that surface might be useful for hands on digital mixing in a studio environment, but i wouldn’t pay 3k for that, plus it doesn’t look like you could fit any PCI cards in it…so that rules out decent low latency audio interfaces and pretty much any UAD products

True but tbh I just don’t use many plug ins. It’s surprising how little u can get away with lots of studios seem to use very old outdated Mac pros. Like 2010 or older with 16gb of ram. Idk the one at the studio I used to work at struggled doing anything except running a session on protools.
I’m guessing it’s down to the fact that it had a lot of the processing running off pcie stuff “Pro.” “Creative.” They’re words that are repeated so often in computing it’s easy for some people to forget what they mean. By definition, though, if a “professional” is getting paid for their work, investing in more power to get their work done has...

In my opinion for the amount of money you are spending you can build an amazing pc that will hold all your workflow because Serum aint light on the CPU. You could always purchase a touchscreen monitor later. This is aimed for graphic designers and cad designers.

IMO, if you don’t bounce your shit to audio, there’s no point crying about CPU.

I know it’s designed for visual peeps but it appears beefy enough to handle the same general kinds of media jobs ppl used to throw almost exclusively at Macs - the fact that MS is even targeting the creative sector is what’s getting my hopes up here. Moreover, touchscreen integration into application workflows is also exciting to me, like the best of iOS and a desktop OS at once.

Like using Reaper with both hotkeys and touchscreen at same time =

Yes, for the money one could build a sweetass PC and throw in a great soundcard (maybe even some a RAID too) but again, it’s the direction this is going that’s peaked my interest… Given that Apple is resting on their laurels with pro audio right now and all.

Why consumers are switching from Apple Macs to Microsoft Surfaces

Both brands released new models this year, but design differences have caused users to lean toward the Microsoft Surface

A surprising trend that has become noticeable during the holiday season is the consumer’s decision to switch from using Apple Macs to Microsoft Surface laptops. Both brands released new laptops this past fall — Microsoft launched its updated Surface Book while Apple finished its 2016 MacBook Pro. While the usually well-performing MacBook has been selling strongly, issues with the new model include less battery capacity, no SD card slot, and such a thin structure that the laptop’s stability is compromised.

So many complaints over the new upgrade emerged that Apple’s marketing vice president, Phil Schiller, even addressed the problems, saying, “Many things have impressed people about it, and some have caused some controversy…It is a really big step forward and an example of how much we continue to invest in the Mac.”

In response to some of Apple’s controversial changes, Microsoft has geared its own marketing toward promoting benefits of a switch to its own product. A Microsoft webpage reads that the new Surface model, including up to a 16-hour battery life, works well with iPhones and common Apple apps. “We know moving these memories and learning new software can be nerve-wracking,” the page shares. “We designed this site to make it as easy as possible.”

So, what else has Microsoft done to convince Apple users that the Surface might be a better fit? Firstly, Microsoft announced in October 2016 that it would offer up to $650 for anyone choosing to “trade up” a MacBook Pro or Air for a Surface Book or Pro. “Our trade-in program for MacBooks was our best ever, and the combination of excitement for the innovation of Surface coupled with the disappointment of the new MacBook Pro … is leading more and more people to make the switch to Surface,” the company remarked. In the same CNET report, Microsoft having touchscreens was seen as an advantage over Apple, which has called featuring touchscreens in its own computers “unlikely.”

Microsoft has also gone above and beyond in its tutorials on moving personal files like photos and music from a Mac to the Surface. Providing tips for longtime Mac users and instructions on using Windows 10, the “Switch to Surface” movement has proven to be successful with those disgruntled by Apple’s changes. While both brands still offer reliable laptop options, Microsoft’s clever advertising and interactive features may ultimately make it the company with a winning profit this year.

So you don’t need specs except for the specs you do need?

The Surface Studios specs are below par, but it’s about concept rather than performance. I can see the advantages of having a huge touch screen that can be adjusted to be horizontal to the table for a DAW.