OK Nomine is always mentioning this in his videos.

How much compression do you go for in your tracks?

He says if the tune is quiet he’ll just turn the gain up in the mixer.

I’ve started to use less and less, maybe some slight parallel on the kick and snare and just sidechain the sub. Also, what about on the master? There’s a tight preset in ableton called Mix Gel which has the right parameters.I use it as my go to.

OK next question. Is it OK to have the finished article red-lining if you don’t want to use a limiter in order to retain the dynamics? Like, not massively - mostly in the green but touching red?

i tend to use 5 or so compression per track; sometimes more, sometimes less

i like compression, he is a cool guy and doesn’t afraid of anything

OK next question. Is it OK to have the finished article red-lining if you don’t want to use a limiter in order to retain the dynamics? Like, not massively - mostly in the green but touching red?

I wouldn’t do that. If your submix is so loud that the limiter on your master is crushing your
dynamics, it’s doing way too much imo. Obviously nothing is set in stone and people employ unconventional mixing and mastering techniques to great effect, but for me, the master is reserved for small EQ changes and keeping the track from clipping.

That being said, there’s tons of digital releases out there that clip on my meters and
I think you can attribute that to the loudness war. I compare it to driving on the highway…
you can drive a lot faster than most other cars, or a lot slower, but in the end your just going to stand out and not in a good way. I just throw some reference tracks into my project and on the master I have a meter with clip logging and a vu meter to get a visual representation of the dynamic content.

So - next question, what should your limiter be hitting. I heard nothing less than -6 because anything else you lose dynamics.

No - where the meter is peaking.

-6 peak seems to be a waste of headroom, maybe you’re talking about rms levels? 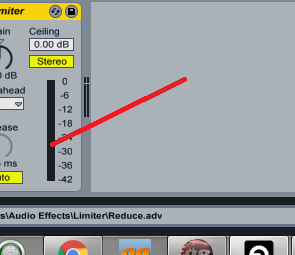 I don’t use Ableton, but I’m assuming that’s the output meter of the limiter. If you’re
mastering your own track, you can hit a lot higher than that in peak

You usually have an input meter, an output meter and a gain reduction meter.
A limiter is basically designed to catch peaks, so you would generally set a very fast attack
and a pretty high ratio, especially on your master. I mix to about -1.5dBfs before I hit the limiter on my master or print bus. This gives me some wiggle room but it’s fairly ‘loud’ already and I never go above 2dBfs of gain reduction on this limiter. Then you have the trim gain, threshold and ratio to play with. My master limiter barely does anything really.

All of this gives you a good indication of whether your track is clipping, but you only get a very basic idea of how loud it is because it measures in samples. Ideally, you’ll want to use a meter that shows you the level while taking the perceived volume into account. These meters usually measure in LUFS. I’ll cut to the chase, there’s no general target in LUFS for your track but it’s good keep in mind that some streaming platforms normalize your uploads and most reduce the bitrate. If you kind of just want to be as loud as others, but not too loud, try to get a max of -8 LUFS while still retaining dynamics.
Spotify will stillstep on some transients at this level, but SC for example won’t.

Hope this helps. At least keep in mind that perceived loudness is not that easy too measure. It’s good to use some reference tracks, maybe buy some wavs of tracks that you
know very well already. Let me know if you have questions about meters or limiters, maybe try some out. You can try out Grimm Audio Levelviews for a week, after that it’s €35.

Once the track is mastered - how high should you set you master gain. Because I mix at -6db - but I’ve seen mastering videos master the track and leave it at -6db.

Also; what sort of EQing should you be doing? I tend to have mid and side EQ with the mids cut at 30hz then a cut around 300hz - then roll the highs off. Then the sides high passed at about 250 with the highs slightly boosted.

Technically if your limiter is working at all you’re “losing dynamics”, thats the point of a limiter. Reducing peaks a.k.a. the dynamic range. just a question if how much is good and how much is bad.

As far as mastering loudness I dont really use master compressors per se much, maybe some parallel comp if I’m feeling like it and it sounds better that way. Usually I will soft clip the track slightly, just a bit less than where it starts to add too much distortion (listen back several times and focus on different elements to be sure it’s not too crunchy. But I’ve been going hard on the saturation too as a separate step beforehand and have been liking lots of distortion lately so

if you want really clean sounding tracks be more conservative) followed by a utility to duck it down 6db again so it has some headroom before it hits the limiter. I usually only have the limiter (Pro L2) where its reducing 2 or 3 db of gain max, set to true peak mode and -0.1db final output. No redlines that way. Not necessarily “the way” to do it but I can generally get pretty hot levels without totally crushing the whole track’s dynamics. If you can monitor your LUFS (Pro L2 has it built in, or you can get MLoudnessMonitor for free from Melda) and compare to reference tracks you like that’s a good clue. A lot of ‘good’ dubstep these days seems to be around -10, some really blown out EDM is like -7 or -6. If that gives you an idea

As far as whether you should make it loud that’s just subjective.

Tell me more about the utility? Do you set it to 100% stereo? And what about the gain on it, what sort of level? Because I once made a track where I used a utility grouped with a limiter I set the gain level of the utility to about minus 18 then 100% stereo. Then turned up the group to 6db and whacked the limiter gain up. the meter was hardly moving. But like someone says - that means the limiter isn’t working, right?

I turn down the master to around -6 to -8 when making a track. When I’ve finished the tune I’ll push the master as much as possible so its about to clip.
Then I’ll adjust eq and channel levels to see if theres any more headroom to squeeze out. I dont use compression.

A limiter shouldn’t generally be working hard on the master, the problem is when it works too hard it “pumps” too much and the track starts to sound weird, which is what you wanna avoid. The harder you push it the more volume you’ll get but it’s a tradeoff. That’s why I soft clip also cause it reduces dynamics without any pumping side effects, just distortion if you push it too far.

I wouldn’t recommend turning the master gain down because it doesn’t really solve the problem. Without any effects enabled on the master channel, and with the master gain set to 0, you already shouldn’t be peaking in the red. If you are, select all tracks/buses/groups and turn them down at the together till its hitting around -6 on the master channel. (doesn’t have to be -6 really, could be minus -3 or somewhere in that range.) If you turn down the Master gain you’re letting it hit all the plugins, etc while peaking and then just turning down the final output which is not ideal.

As far as utility on the master channel, it’s the exact same as turning the gain up or down on the master fader except it could come before other plugins in your master chain. I wouldn’t change any stereo settings on a utility on the master just cause it could have some weird side effects and you’re effecting the whole song, including stuff you wanna keep the stereo placement mono like subs, kicks etc. Do that stuff on the stereo elements individually or in groups before your master imo. But up to you I guess.

The utility I mentioned between the soft clipping and limiter is only because to soft clip your master signal it has to hit 0. Specifically this is for using the Glue Compressor for soft clipping in Ableton. Any other master processing (eq, saturation, other compressors or fx) should go first, the Glue Comp with range set to zero (this prevents any compression from happening, so it only works as a clipper) and the soft clip button on. Turn the makeup gain on the Glue Comp until the light light by the soft clip button is flicking, and keep going until.you hear it distort too much, then bring it back to where it’s working but still sounds good. Outout of the Glue Comp will be right up at zero, so put the utility after and you only turn the gain to -6 so that the signal out of the Glue Comp isn’t peaking into the limiter. Then put your limiter right after that. Not sure how much difference it makes technically in that case but its always better to have audio coming into plugins, busses and groups and everything at a reasonable headroom - just in case. That said, turning down 18db doesn’t help any more than turning down 3 or 4. It’s the same thing, you just have to turn it up that much more in the limiter until it hits the threshold.

Also should mention when doing this, it’s only going to help so much if your individual tracks still have really big, ‘spiky’ dynamics - you need to address them all individually before you try to squish it all together in mastering. Especially with drums and percussive stuff that has more of a transient. I’ll often do soft clipping or limiting on individual tracks or busses in mixing before it even gets to the master, then again on the whole master. Most of the time (unless you’re using heavily processed one shots to begin with) you can increase the perceived volume compared to the peak volume by a LOT. Meaning that you reduce the volume of the transient and turn the sound up overall. Limiters, compressors or soft clipping are all possible ways, which is better depends on the case, basically whichever has less undesirable side effects. I find you can often go harder on it than you expect. It doesnt matter what the waveform looks like, just whether it still sounds good.

Are there any plugins available which imitate a glue compessor?

Doesnt need to be glue compressor, the ableton one just happens to have a soft clip function. If the saturator in 8 has soft clip as well, you can use it instead and do everything else the same.

Also can I just clarify - when you gave those figures about -10 for dubstep -6 for EDM etc were they what you leave your master channel at?