In addition to Plan B’s refit having noise complaints already so no bass for the Loefah night, the Elephant & Castle pub where UK Garage was essentially born is being turned into a Foxton’s estate agent.

there’s just nowhere sick left in london where you can get loud ffs, like shapes- system was clamped there early on ITS IN HACKNEY WICK that could not be more the ARSE END OF NOWHERE
500m more and you’re on the motorway!

It was a warning sign the moment they started telling SW4 to turn it down.

The Dome also stopped “loud” nights for over a year (and still going) cos of complaints.

Matter or whatever its called at )2 can, but is the arse end of know where. They tried having a club mini bus ferry people back to a tube stop for awhile, maybe 24hr tubes will help.
Only place Ive seen RC1 advertised as unrestricted tho.

Agreed with Corsica, room 2 swtich around has affected it as well imo.

Alot of basment venues skimp like fuck on the sound which only exasperates the problem.

Out by the road at hackney is a place called i-can studios but again its a hike from the trainstation, which is a mission away as it is for most people.

West london is desolate as far as I can tell.

Fire/Lightbox was getting new extra subs fitted when I visited last week to look at doing a night there.

All the railway arch ones like Ewer street have gone as well.

That at least looks interesting;

Shogun Audio have started doing their nights there. Think what you like about their music, but Friction picks his soundsystems well. Used to fucking love their nights at Cable.

I miss Cable so much

I miss Cable so much

last time I went there it was full of tanned fuckwits in neon vests (or, obviously, rocking the immensely popular shirtless look) and plucked birds.

last time I went there it was full of tanned fuckwits in neon vests (or, obviously, rocking the immensely popular shirtless look) and plucked birds.

I wasn’t really there to look at the clientele.

me neither, but they were kinda hard to ignore when flexing on top of the little tables / boxes, displaying their armpits at head-height and all.

first few times there was very good though.

I once boshed some research chemicals that made me think one hand was massive and one hand was tiny. Spent the whole night clutching my drink convinced I was holding onto a thimble in a giant mitten paw.

Come to think of it, that was a Shogun Audio night as well. Rockwell doing one of his weird sets in room 2 really didn’t help things.

ha! dunno how lucky you are
Sydney’s virtually been shut down by wealthy LBGT & Chinese who buy all the inner-city apartments and bland out everything.
Oxford St’s virtually dead because of it. Nobody wants their cocktail cabinet rattled.
and Broadway’s going that way with the grunge making way for o/s student accommodation
(what was wrong with the old flea pits generations of Oz students caught TB in?)
so that peripheral/non public transport accessible warehouse parties have made a come-back.

we’re in danger of our natural environment being taken from us folks
we need to start campaigning for sub-bass amenable zones (SBAZs) around the world!
don’t even mind if they include allowing tobacco-smoking/vomiting/urinating…might help keep the riff raff away.

Coronet has announced it’s closing in 2017;

““We have been here for so long, and we will be really sad to go, but
with the Elephant & Castle changing so much, so quickly, it’s become
clear that the evolving character of the area is no longer right for a
venue like ours.”

Another one bites the dust…

Good read here on the misconceptions and fear (or, at least, that’s the excuses being put forward) about nightlife culture that appear to be driving policy in London and elsewhere: 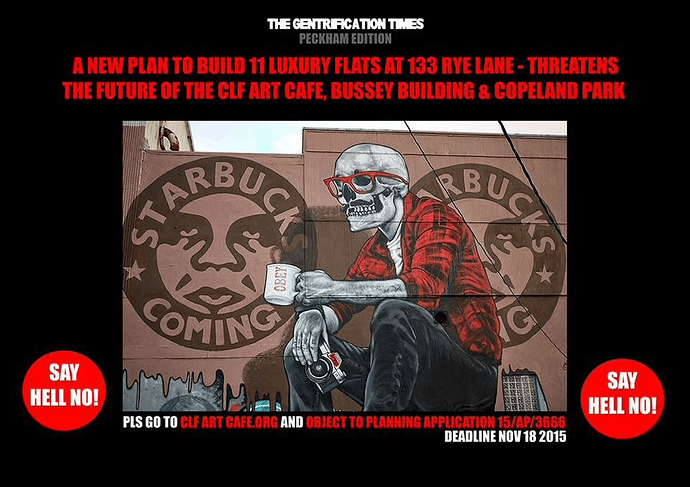 Waste 5 minutes on an objection here, if you so wish:
http://planbuild.southwark.gov.uk:8190/online-applications/applicationDetails.do?activeTab=makeComment&keyVal=_STHWR_DCAPR_9562425

And it keeps on coming; The Dalston venue says it's closing because of the "licensing climate" in the Hackney council area.

The Kingsland Road venue, which opened in late 2012, says in a statement released today that the closure is down to the “licensing climate” in Hackney. Most nights at Dance Tunnel run until 3 AM, though there are occasional 5 AM finishes that require a TEN (temporary event notice).

These notices—essentially one-off license extensions—are difficult to obtain in Hackney, whose council will redraw its licensing system after withdrawing its 2015 proposal due to opposition from nightclub owners in East London. (At the time, Dance Tunnel owner Dan Beaumont called the licensing proposal “regressive and damaging.”)

I wonder where fwd will move to now.

i hate this town lol

This guy who’s running a car wash in Harlesden is building a venue at the back by the canal. It’s gonna have a glass floor so you can see the water when you’re dancing. 100% DIY. It would be equally awesome and scary to put up a night in there.

Sad bout Dance Tunnell - nice little venue, had a few good ones there. Friendlest bouncers as well. Think I’m gonna have to start reaching FWD again before it shuts for good.